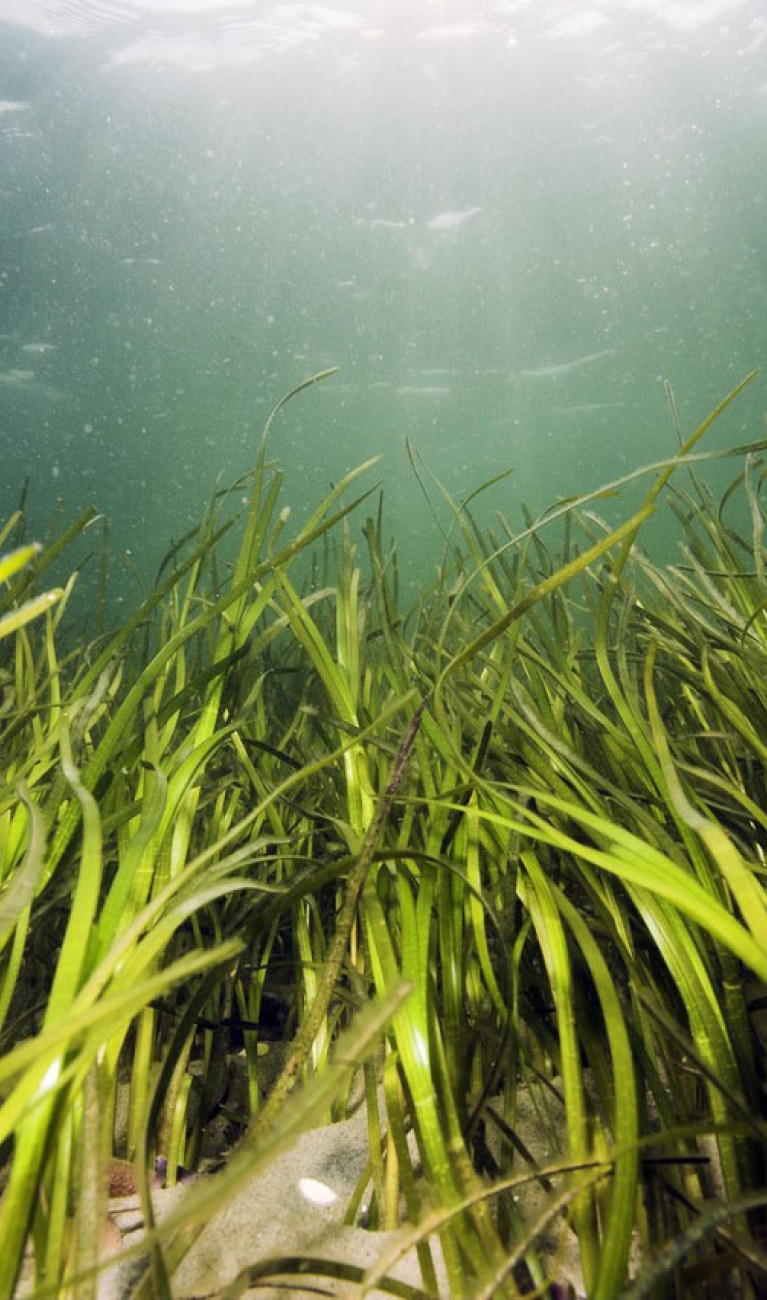 “For seagrass meadows the impacts could be severe”

Two thirds of the earth's surface is covered by water. Oceans play an important role to us humans - they are food sources, heat stores, trade routes and one of the most important stores of carbon dioxide (CO2). In particular, seagrass meadows along the coasts absorb a lot of CO2, but this ecosystem is sensitive to the effects of climate change and could lose much of its storage function.

Angela Stevenson, a postdoc in the "Marine Evolutionary Ecology" research unit at GEOMAR in Kiel, is examining the condition of seagrass meadows along the German Baltic Sea coast to find out how they can help to reduce CO2 emissions.

Angela, oceans and seagrass meadows along their shores store huge amounts of carbon dioxide. What role do they play in the global carbon cycle?

The ocean is one of the largest carbon sinks on Earth, absorbing approximately 25 percent of the CO2 we emit yearly. For example, between 1994 and 2007 they were estimated to absorb 34 Gt CO2 during that period. How much CO2 the seagrass meadows in the German part of the Baltic Sea can store is what I will calculate in my research. Outside of Germany, they store between 627 and 4324 g carbon per m2, depending on the size and condition of their habitat.

What is special about seagrass meadows?

Coastal vegetated systems, like seagrass meadows, mangrove forests and salt marshes, play an important role in the global carbon budget due to their exceptional ability to capture and store organic carbon below ground. Burial rates here are 30 to 50 fold greater than that of forests on land. In the Baltic Sea, seagrass meadows are vast. We have a total area of approximately 285 km2 of these habitats.

How can one imagine seagrass meadows?

Seagrasses are marine plants that live at depths of about 1 to 8 meters in German coastal waters, and slightly deeper elsewhere around the world. They have roots and root stocks, so called rhizomes, below ground, and shoots and leaves above ground. Like other plants, they need light to survive and take up CO2 during photosynthesis. It is the seagrass’ dense canopy that distinguish it from other plants in terms of enhanced carbon storage: the canopy increases particle capture from the water column and reduces water flow along the seafloor, efficiently lowering loosening up of sediments and hence protecting buried carbon. The plant’s intricate below-ground network of roots and rhizomes is not easily displaced, and their muddy sediments enhance low oxygen levels that inhibit microbial activity and thus remineralization of buried organic carbon. This process further increases long-term organic carbon burial efficiency.

How is CO2 stored in the ocean?

Via the ‘ocean carbon pump’, that pumps the CO2 from the atmosphere into the depths of the ocean.

At the air-seawater boundary, CO2 dissolves - the colder the water, the more CO2 can be absorbed and transported through circulation to the colder, deeper layers. Some of this CO2 is converted into organic carbon by microscopic organisms, algae, and marine plants like seagrasses, mangroves or salt marshes. Carbon converted by marine plants is known collectively as "blue carbon".

How does climate change affect the ocean?

Manifold. Climate change is altering ocean chemistry, sea levels, temperature, and extreme weather events. We know that ocean acidification and warming have negative downstream effects on biodiversity in coral reefs, mussel beds, and some macroalgal habitats. Let's take seagrasses as an example because they are widespread along the German coastline. The impacts of climate change could be severe. Temperature and depth are generally the most important limiting factors for these habitats. So warming and sea level rise might impact their distribution, contracting their range. Indeed, loss of seagrass habitat has been associated with heat waves in some areas of the Mediterranean. Increased wave action and storm surge from extreme weather events associated with climate change, could further impact their survival potential in impacted areas.

What is your research in the Helmholtz Climate Initiative focused on?

My main task is to obtain an inventory of carbon stocks in seagrass meadows along the German Baltic Sea coastline. This way, we can advise on seagrass contributions to the German national carbon budget, as well as determine how to enhance and protect these stocks. With this information we can carefully assess the broad range of carbon stocks and fluxes to accurately calculate the CO2 equivalent avoidance and negative emissions potential of seagrass meadows in German territorial waters in the Baltic Sea.

In its Agenda 2030, the United Nations stated 17 global goals for sustainable developments. One is about saving oceans and life below water. How can seagrass meadows be protected?

Coastal vegetated habitats are not only biodiversity hotspots, enhance the water quality, and provide coastal protection. Seagrass meadows, and others, have been accumulating and storing carbon very efficiently below ground for centuries to millennia. Knowing this, going forward, if we are to achieve net-zero emissions by 2050, it will be important to keep these natural carbon sinks intact, below ground, and protect the life living in it. That means conserving these systems and preventing further degradation of the meadows, and therefore carbon sequestered herein, through restoration of damaged habitats.

In your opinion, what should be done for seagrass meadows along German coastlines?

For Germany’s seagrass meadows, funds to develop successful restoration techniques and research natural and man-made influences should be implemented so we can mitigate for these during restoration. It would also be prudent to look into the impact of climate change on sequestered carbon to improve our carbon footprint for coastal vegetated systems under projected climate scenarios.

By how much could the habitat of seagrass meadows along the Baltic Sea in Germany be extended?

This is a very difficult question to answer since we do not have a complete understanding of historical areal extent of seagrasses. Team members of the GEOMAR Marine Evolutionary Ecology group have been mapping seagrass meadows here for the past 10 years, so we know where there were gains and losses over the past decade. Restoration could certainly take place where we know seagrasses existed before. Presently, we know that seagrass meadows span approximately 285 km2 of the German Baltic Sea, so there are many more unvegetated locations within the depth limit along the German coastline where seagrasses could be planted, but it is unknown whether the plants would survive here, because we don’t know if these locations ever favored them in the first place.

Is there something that every one of us can do?

Talk about seagrasses, educate yourself and the people around you about the importance of these and other natural systems as a whole and in their capacity to mitigate our emissions. Support community efforts and engage with them if you can.