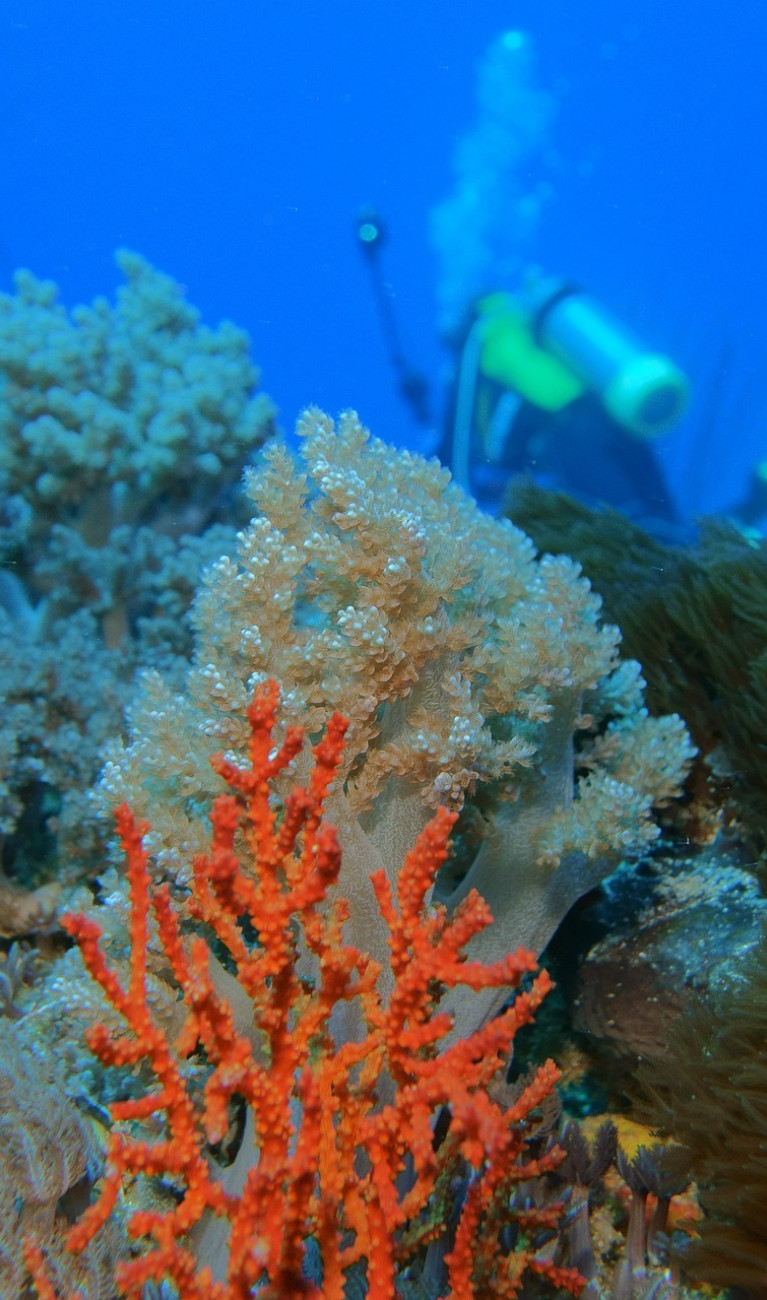 The risk of passing dangerous tipping points in the climate system rises with every tenth of a degree of global warming. Climate change threatens ecosystems, vital natural cycles and the well-being of future generations. What path are we on, and why is it so important to strive for ambitious climate targets?

Humanity is causing massive changes in the Earth’s climate. In 2015, the international community agreed to keep global warming below 2°C. The Paris climate targets are meant to prevent the most severe disruptions to the earth system, as the consequences of climate change might otherwise become uncontrollable. Then, “so-called tipping points cause abrupt and possibly irreversible shifts in our ecosystems,” explains Marlene Wall of the GEOMAR Helmholtz Centre for Ocean Research Kiel in Germany. “Even today, entire regions of our coral reefs have been substantially altered by mass coral bleaching.” In a much warmer world, more and more ecosystems would be irretrievably lost, forest fires would cause greater havoc, and uncountable species would become extinct. This would also mean great danger to the livelihood of millions of human beings.

With the Paris Climate Agreement, the signing countries commit not to exceed the 2°C  goal (global average compared with pre-industrial times), and if possible, to keep global warming under 1.5 degrees. Even this apparently small rise in temperatures would significantly alter the face of the earth: The first tipping points could well be reached, thus triggering radical changes to our climate system. “The loss of ice [in the polar regions] will continue over centuries, even if we one day succeed in stopping global warming,” says Ingo Sasgen of the Alfred Wegener Institute for Polar and Marine Research (AWI) in Bremerhaven, Germany. “However, how intense this will be, or whether it will be irreversible, is up to us.”

The destruction of tropical coral reefs

A temperature increase of only 1.5 °C by the end of this century could cause the death of a majority – roughly 70 to 90% – of the ocean’s coral reefs. If the planet warms by 2 °, the consequences for coral reefs would be even more disastrous: Only an estimated 1-2% of the world’s coral would survive in that scenario. Climate change is a two-fold disaster for coral: The warmer water causes these aquatic animals to repel their symbiotic partners – small, colorful algae. This causes the corals to bleach and weaken as they no longer receive sugar from the algae. What’s more, CO₂ seeps into the water from the atmosphere and makes the water more acidic. This makes it more difficult for coral to form its calcium carbonate skeleton.

If 99% of the world’s coral disappeared, the consequences for marine biodiversity would be catastrophic. As the ocean’s rainforests, coral reefs act as a home and nursery for many fish and other forms of marine life.  In other words, the 1.5 ° target is a matter of life and death for coral.

Melting of the Arctic sea ice

Sea ice in the Arctic plays a central role in the Earth’s climate and ecosystems. Unfortunately, its thickness and area have been on the decline for decades. This means that the darker ocean surface is no longer covered with white ice, causing a change in the so-called albedo effect. White surfaces reflect radiation, thus helping to cool the earth. Dark surfaces, on the other hand, absorb radiation, and therefore become warmer. When the color of the Arctic is no longer characterized by glittering white ice, but by the dark-blue sea, the earth will absorb more radiation. This will consequently exacerbate global warming and further accelerate the melting process.

Arctic sea ice has already shrunk by 3.45 million km2 since 1979. Scientific studies suggest that, starting at a 1.5-2C° rise in global temperature, the loss of sea ice will trigger further processes in our climate system, potentially leading to consequences that will last for centuries or even millennia.

The melting of the Greenland Ice Sheet

Ice melting has increased significantly in Greenland over the past few years. The ice sheet previously rose to heights of up to 3,500 meters – but as Greenland’s glaciers melt into the ocean, the surface of the ice sheet is sinking. At lower altitudes, the air is warmer, so that lower altitude means a greater loss of ice. Greenland is still home to more than 12% of the Earth’s total ice mass. If the Greenland Ice Sheet melted completely, sea levels would rise by approximately 7 meters, with effects that would be felt most strongly in the Southern Hemisphere. Scientists estimate that even a global warming of 1.9 °C would cause the Greenland Ice Sheet to melt – slowly but irreversibly.

Satellite measurements show that sea levels have risen by approximately 12 millimeters since 1992 due to ice melting in Greenland alone. Of this overall rise in sea levels, 80% has occurred after 2003 – roughly within the last two decades. The worst five years all lay within the last decade, with 2012 and 2019 being the ones with the highest loss of ice.

Large portions of the West Antarctic Ice Sheet lie below sea level. This means it is part of the “marine ice sheet” and thus potentially unstable. The West Antarctic Ice Sheet is very sensitive to the warming of the surrounding ocean. The ice shelves that line the ice sheet play a key role here and exert restraining force on the ice being transported being transported toward the ocean. As ocean temperatures rise, the restraining force of the ice shelves diminishes as the ice gets thinner or fragments completely. This in turn accelerates the inflow of the land-based ice sheet into the ocean. The ice sheet pulls back to deeper ocean regions, which further reduces the restraining force and exacerbates ice melting – a vicious circle.

Recent projections suggest that a rise in ocean temperatures of around 1.2 °C could cause a progressive shrinking of the West Antarctic Ice Sheet. This water temperature is expected to be reached at a global warming of 1.5–2 °C compared to pre-industrial times. Measurements and computer simulations show that the ice mass of the West Antarctic is already much more unstable than it once was. In the coming centuries, the disintegration of the ice-sheet could cause an additional sea-level rise of roughly three meters.

Permafrost is soil that permanently exhibits temperatures below the freezing point. This type of frozen soil covers approximately 25% of the Earth’s surface, and found most in Siberia, Canada, and Alaska. Permafrost can be up to 1,600 meters in thickness. As the frozen soil thaws, microorganisms transform the organic carbon it contains into climate-damaging gases such as methane or carbon dioxide. Global warming would cause the southern border of the permafrost to shift north, causing the soil to thaw down to deeper layers in the summer.

Studies have shown that approximately 1.7 billion tons of carbon are bound in this soil and that large amounts may be released if global temperatures increase by 1.5 °C or more.

Methane emissions from the ocean

The Earth's Seabed stores large amounts of so-called methane hydrates – gases trapped in frozen water. Methane gas has a lower density than water, but remains stored in our oceans due to the high pressure and low temperatures on the ocean floor. These conditions normally exist at depths of 500 meters and below, but can already be found at 250 meters in colder polar waters. As the atmosphere gets warmer, so does the surface of the ocean. Currents, which act like conveyor belts, carry the warmer water through the oceans, and in some places into the deep sea. Contact with the warmer water causes the hydrates on the ocean floor to become increasingly unstable, which then releases the trapped methane gas into the atmosphere.

Because the ocean's “conveyor belts” move slowly, this warming of deep sea waters will likely not be felt for several centuries. Methane outgassing thus represents a long-term result of climate change. But experts assume that this process will significantly increase global warming once it has irreversibly begun.

Carbon uptake by the oceans

More carbon is stored in the ocean than anywhere else in the environment: 50 times more than in the atmosphere and 20 times more than in plants, other organisms, and soils. Thanks to its carbon uptake, the ocean has so far protected us from drastic climate change – it has trapped 48% of human-caused emissions between 1800 and 1995, preventing these gases from warming our atmosphere. This was primarily achieved by algae: Through photosynthesis, algae use the carbon in CO₂ to grow – a process that also produces much of the oxygen we breathe. When the algae die, they take the stored carbon with them to the ocean floor. This “biological carbon pump” may be disrupted if the water contains less oxygen or if it becomes warmer and more acidic.

Acidification is a direct result of climate change: A portion of the carbon dioxide in the air reacts with the water, causing its pH value to drop. In turn, this has consequences for marine life forms that use calcium for their bodies, including plankton, mussels, snails and coral. Precisely how this would impact the food chains of our oceans remains unclear.